This is the seventh of a 6-part series on the W’s.

WHAT is happening? – Apparent Event
WHAT do you want? – Actual Event
WHERE are you? – Environment
WHO are you? – Character and Relationship
WHAT is the obstacle? – Conflict
WHAT just happened? – The Moment Before

First off, sorry it’s been a few months. COVID-19 and all, I don’t think I need to explain more than that.

Put The W’s Together

Second, now that I’ve outlined the W’s, it’s time to put them all together. You can certainly do your own thing, but I usually take them in the order I set out above, Apparent Event, Actual Event, Environment, Character and Relationship, Conflict, and The Moment Before. THIS IS NOT A RULE. I can and do violate this order all the time.

But why suggest that order, then? Wouldn’t it be better to decide on the characters first? Or the actual event? I usually have a pretty decent idea of where I want the story to go, and I know the main character of the scene before I get to the W’s. Choosing the apparent event forces me to get creative, and will usually tell me who the other characters in the scene should be. Not every scene can be in a law office, right? Setting the apparent event constrains my choices for the rest of the W’s. Also, once you know your main characters, apparent events will present themselves to you almost unasked.

Conflict is often the most difficult part of this to define, though it might not seem so at first. If you only think of conflict as a fist fight, you’re getting it all wrong. Sure, there can be a fist fight, but that would probably be an apparent event with a huge subtext for the actual event. The conflict is internal to the characters, usually, sometimes external. But you don’t want it to be trite or on-the-nose. No black knights blocking the bridge into the abandoned castle, please. How about a lovely peasant girl inviting the knight to cross the bridge? Would you trust her? Why not?

I’ll share a bit of my work in progress below. It’s how I plot out my stories using the W’s.

Remember, for a regular novel you have about 70,000 to 90,000 words, which seems like a lot until your first draft has 125,000 words and you have to cut it by a third. A novel is going to have between 60 and 80 scenes, which again seems like a lot but is actually nearly nothing once you get into it. You need to be economical, you need to work smart, you need to know what you’re doing before you start writing. You do that by using the W’s.

An image of a scene breakdown for my current work in progress: 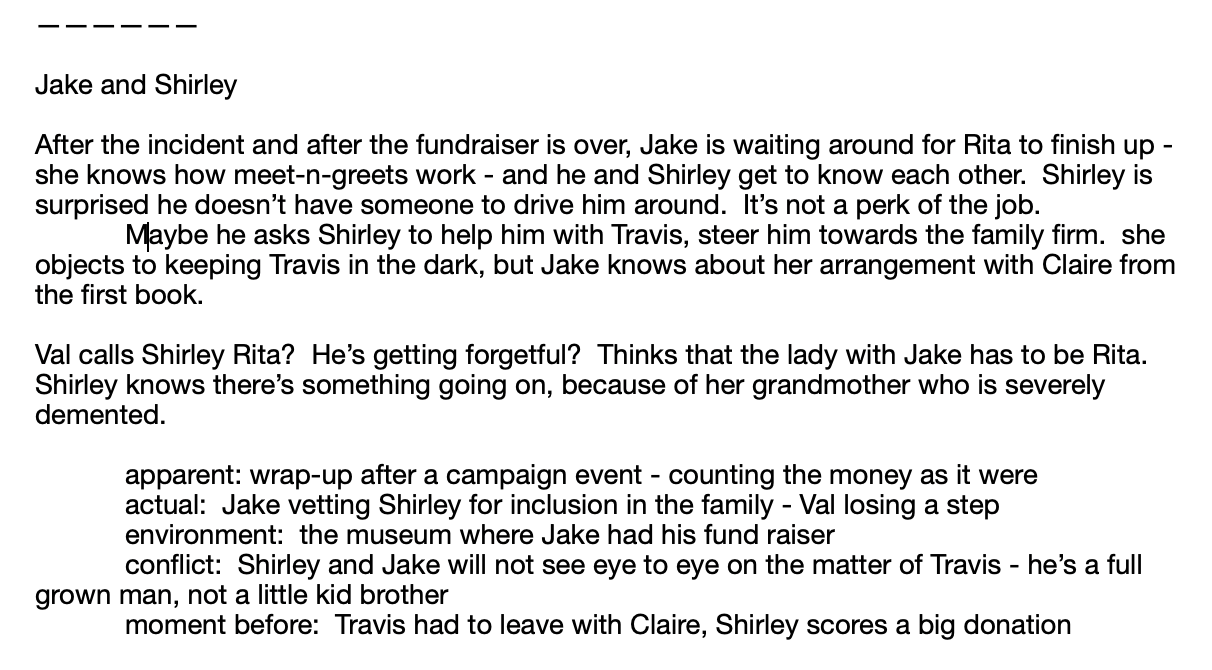 I tried not to give too many spoilers, since this novel is a sequel to ‘The Guilty Die Twice,’ but you can see how I work. I don’t have the characters listed with the other W’s, I have them at the header of the scene so I can tell at a glance who is getting the focus. Later on I may have to rearrange things, and having the characters up top makes that easier. Then I have notes to myself on the scene, including possibilities for later scenes, and then the W’s nicely outlined.

Give It A Shot

Feel free to take this advice and make it your own. Recall that I came to this method as an actor and adapted it to my writing. My acting teacher gave all her students a business card with the W’s on it, and I have that card to this day, I’m looking at it right now because it stays on my desk centered beneath my computer monitor, where I can see it every time I write.

Good luck! Let me know how it works out for you.